Delicious donuts, a change of plan (again), 3 Hexes, 2 wires and a Prusik Loop

I was going to write a blog about the importance of knowing how to prusik but after writing it and reading  over i decided it was dull and instead, to write about donuts. (The prussic thing is at the bottom)

DELICIOUS SUGAR COATED DONUTS. They have been missing from my life. Through Mexico and Central America they have been weighed, measured and found wanting. Some shops sell dry ones that have sat for days. Some look like donuts, but are poor sponge cake imposters; dryer than the previous and coated with a bland coconut covering.

I was feeling peckish one Suesca day and decided to see myself to the bakery. While buying bread for the day, I noticed out the corner of my eye a real treat. A tray full on ring donuts with a good sugar coat. I was psyched. I purchased a couple.  On returning to the hostel I made coffee, sat down and began to chow down.  The extra delight hit when i realised despite the missing hole they had still filled them with a delicous caramel apple sauce. Enough on donuts.

Now, the past couple of weeks we had planned on selling Karli’s car and continuing on bicycle down through the south. This plan was going great until the buyer backed out a couple of days before he arranged to buy it.  Which is fair enough, and we have quickly and cayoticaly re-planned. The car will now be shipped back to mexico, where we will meet it on the 8th of february after flying via Miami, then drive it back to Colorado, weaving to destinations as we go. From denver, we will work on selling the car, getting a resupply of extra equipment, go ice climbing till the end of winter (and maybe ski) and then fly back to colombia to cycle the continent.  Hopefully climbing peaks along the way. BOOM!!

The thing I decided not to write

Climbing a rock is one thing, knowing how to climb safely  is a completely different thing.  At the start of this trip with Karli, the very first days climbing, I started teaching her basic climbing knots and some more advanced knots. The majority of which you would or wouldn’t need in a standard days climbing, but some would eventually become useful when you lack or lose gear on routes.

Among these were knots such as bunny ears, munter hitch, clove hitch and the humble prusik knot, or rather three variations of it. At the time Karli questioned what the use of most of these were and why we practiced using them. Until a couple of days ago.

We had a few days of sport climbing, then we went back out doing a repeat climb of L.P. , one of the routes in Suesca. The last time we climbed it we had a blast and it was smooth. 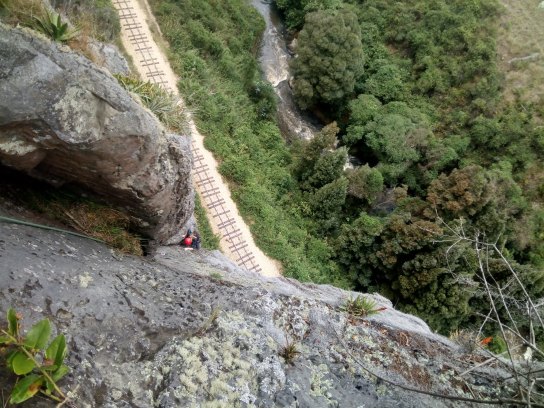 This time every single piece of protection placed straight away and tugged into position nicely. For me this was great and i had a blast climbing smooth, for Karli it turned into a nightmare of hanging on a rope thumping at wires, every single placement stuck fast. So it continued at a belay made up of hexes,me having super easy placements, and Karli probably wishing I was dead . After two pitches I decided to place runners more sparsely to lessen the pain. I led the next pitch, and on pulling the rope for karli to come up behind me it snagged. With no line of sight and the sound of rapids below we couldn’t hear each other. Between me on belay and Karli was around 40 meters of tight rope and 10 meters of slack at Karli’s end. After waiting for about 20 minutes I was contemplating tying off the rope and rappelling down to see if karli was OK when the rope came loose again.

Very resourcefully karli realised I was on belay and the rope was pinched in a crack just out of sight.  She tied on a prusik loop to the rope and began taking in the slack as she moved towards the edge of the springboard under the roof (overhanging rock), eventually tying a new figure 8 mid way on the rope just below the prussic and coiling the spare rope. As she climbed to the edge of the roof the rope came slack and things resumed as normal. A potentially dangerous situation turned into a non-issue with the use of a prussic.  Time spent practicing was well spent. This is the first time in 14 years I have been on a rope that managed to get caught in such a manor.

Karli practicing her prussics a couple of months ago.

To close, a pic of what happens to Karli when she lies in a hammock and there is 60meters of rope hanging about. Enjoy! 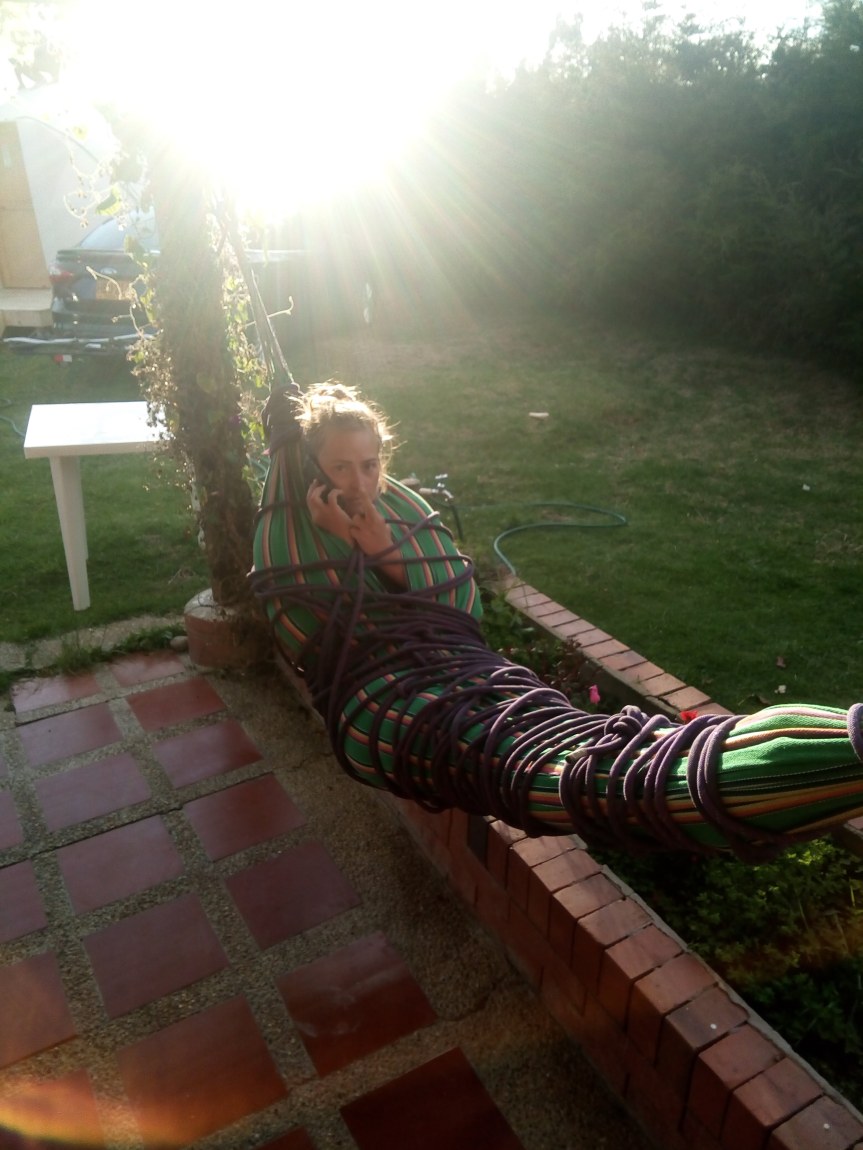