Acute Mountain Sickness And What Makes A Sucessful Trip

After backing down from 12,500ft in the Subara which didn’t quite have the power to go up the volcano on the 4 wheel drive track, and having a nights rest we descended to one of the lower villages knocking on doors to find the local guiding company that could give rides up to the mountain hut. I will admit Karli’s Spanish was more useful here than my charade/ hand signal language. Eventually descending right back to the valley bottom we were directed after several attempts to the mountain guides hotel. We asked the owner Roberto for a lift to the hut for a summit attempt. He gave us a great price of 1600 dollars (Mex) which is around 80 US dollars for a ride up to 14,500ft(4420m, taking around a hour or so), ride down back to 10,000ft, clean water and an extra camping mat for in the hut. This is just out of the tourist season for the peak which starts in a couple of weeks after the rainy season. The ride up was rough, the mud trail we drove down in the morning was a raging torrent of washouts and collapsed road sections getting bigger by the minute. Half way up at one of the guides houses in a small village we changed to a beautiful old maroon jeep. The kind of machine where you hear two whacking great chunks of metal smash together when engaging 4 wheel drive mode. The part of trail that stopped us originally on our attempt was more impassable with water raging down. We were glad we descended when we did in the subaru, this was definately too much for the traction control, road tyres and low ground clearance. The guide told us its normal rain for this time of year. At one point stopping the vehicle to hack tonnes of mud to create a smooth run down into a dip where previously was a road. We arrived at around 14,500ft about 5pm in the afternoon feeling good for our summit attempt beginning midnight. Quickly prepping kit, preparing the evening meal-ramen and packing bags for the early depart. Karli wasn’t enthusiastic about eating the Ramen which made me slightly concerned because a lack of appetite up that high is not good. But to be honest I wasn’t overjoyed at the thought of them either. But we did have a big box full of it we bought back in the states so it had to be used. At about half 6 we went to bed ready for our midnight ascent.

the top of Pica de Orizaba, the mountain hut is behind the black rocky ridgeline to the left, this is taken from 12,000ft

Now, for the past weeks I had been going on about Altitude sickness to Karli to the point she was sick of hearing about it and didn’t want to know. I think this changed just before setting off at midnight when I became aware she wasn’t sleeping, had a cracking headache, and felt like she was going to vomit. To partially quote her, ‘Worst hangover Ever’.

We had been talking about this mountain for weeks. We had waited a week for my package and a few extra days for Karli’s package to arrive with the sole purpose of Orizaba in mind. We had been waking up to stare at it’s snow covered peak for the last few mornings. To get there and not even start the hike to the glacier was slightly disappointing, but AMS be AMS and you can’t fight the right decision for safety.
The journey here was fun, through the laughter and anger and smoke of trying to force a car up a muddy high altitude dirt road. Of filtering tarp rain water into a small pot and waking up with wet pillows and Karli’s deliciously prepared pancakes, making fools of ourselves trying to speak Spanish in a game of charades.  There was so much more to this adventure than the mountain that was staring back at us.

We went into this mountain knowing we were close to the limit for acclimatising, the past week we slowly camped higher, the previous week had been spent around 5000ft. then 7000ft, 9000, 9000, 10,000, 12,000, and finally 14,500 (the hut height), which was a 6hour stop before a dash to the summit and descend back to 10k. We hoped to have longer but with nearly 10days of delayed equipment and being stuck near the US border, the time was gone. We went in with the knowledge a turn back was likely.

Karli seemed much better by the time we reached 10,000ft, though the headache persisted for a while. Roberto had a full breakfast of three courses waiting for us when we arrived back at the base and kindly let us use his hotel showers.
On any climbing trip the safety of the team comes first. Altitude sickness can hit anybody, no matter how fit or carefully acclimatised. There are a few basic rules – If you have symptoms, don’t go any higher, If you have symptoms, descend as soon as possible. If someone has symptoms, do not leave them alone. Symptoms- lack of appetite, headache, nausea, flu like. They progress to confusion, drunken like behaviour, eventually unconsciousness and can lead to death if not handled promptly. The only way to stop the symptoms is to descend. The worst part is it’s silent, and gets worse with time so stealthily it’s hard to notice. descending even a couple thousand feet can reduce it.
It’s a reminder of just how frail the human body is. Change altitude by a few thousand feet too fast and it can kill us. The standard advice is above 8-10,000ft (the point at which sickness usually begins) ascend at a rate of around 1000ft per day, and every 3000ft have an extra days rest. If possible, hike high, sleep low. 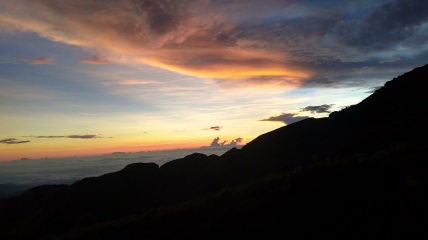 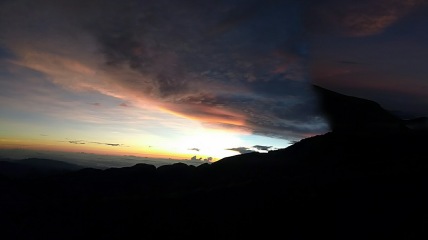 I don’t care that we didn’t make the mountain top, this was a cracking sunrise and great fun meeting locals on the mountain. And we are both down ok.